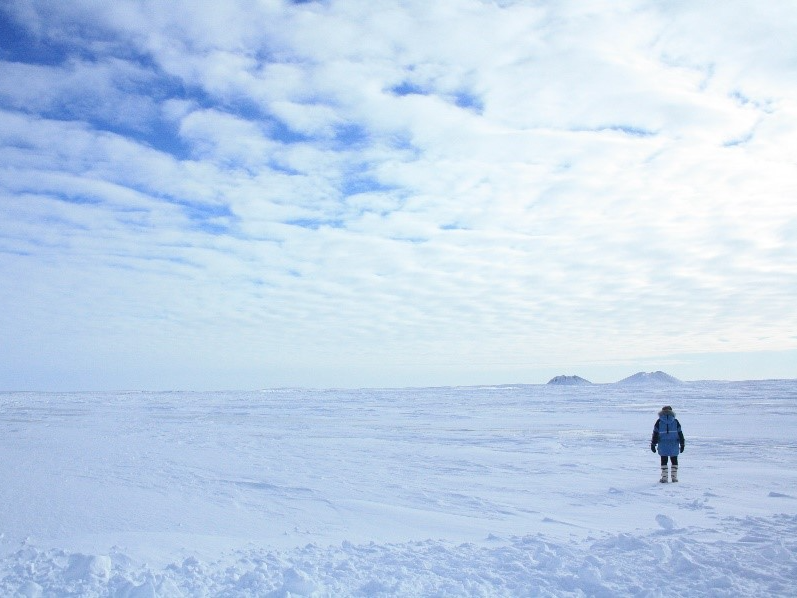 This week, we want to feature the Beaufort Delta! And what better way, than to talk a little bit about Tuktuuyaqtuuq itself! This year, we don't encourage travel to our smaller NWT communities for obvious reasons (erm... COVID-19) BUT! There are so many ways to travel to and learn about Tuk virtually...

Together we have been conceptually travelling along the mighty Big River over the past month with our sights set on Tuktuuyaqtuuq, or “Tuk” as it is known locally. If we were actually walking to Tuk on the frozen ice road we would pass Inuuvik (population 3,265), exit the mouth of Kuukpak (Great River in Inuvialuktun), and continue east along the Arctic Ocean. Along the way we would pass local cabins and tent frames, old oil and gas buildings, and the turn off to Akłarvik. We might see signs for the Arctic Ocean, Reindeer Station, Swimming Point, and Kittigazuit.

We would know we were getting close to Tuk when we started seeing small volcano-like hills sticking up from the tundra: the pingos! Pingos are formed when water freezes into ice and expands within layers of permafrost. This expansion pushes the tundra up, forming a mound. Pingo comes from 'Pingu', the Inuvialuktun term for small hill. Traditionally, pingos were used to assist with navigation. There are almost 1400 pingos in this area, 8 of which are protected within Pingo Canadian Landmark. Pingo Canadian Landmark is home to the tallest pingo in Canada and the second tallest in the world, Ibyuk Pingo. Ibyuk stretches 300 metres across at its base and measures an impressive 49 metres in height.

Shortly after passing the pingos, a community comes into view. We have reached Tuktuuyaqtuuq! Tuk is a small Inuvialuit hamlet on the Beaufort Sea (population ~965). This area is the traditional territory of the whale-hunting Kittegaryumiut Inuit. First settled in the 1930s as Port Brabant by the Hudson’s Bay Company, in 1950 its name changed to Tuktoyaktuk, an Anglicized version of the Inuvialuktun word for “place resembling a caribou.” The community was the site of one of the DEW (distant early warning) radar stations during the Cold War. In the 1980s, Tuk was central to oil and gas activities in the Beaufort Sea. For the most northerly community on mainland Canada, Tuk has seen some interesting visitors over the years including Queen Elizabeth II, Canadian Prime Ministers, rock bands like Metallica, Hole, Moist, Cake, and Veruca Salt, and reality TV personalities Jesse James and Ice Road Truckers. [For many years, Tuk could only be reached by plane or ice road. Since November 17, 2017 however, Tuk has been accessible year-round with the Inuvik to Tuk Highway].

Tuk is a great community full of friendly people who can tell you all about the traditional history of the area. “Visitors are most welcome in the community and there are lots of things to see,” says Holly Carpenter, captain of the Pingo Prancers (2016).

'Like what?' you ask. You won’t want to miss the Our Lady of Lourdes Schooner. This ship braved the Beaufort Sea for almost four decades delivering supplies to Tuk and other Arctic Coast communities. It now sits on land as an icon of the past. Another interesting sight to see is the “Ice House,” a large underground cave cut into the permafrost that serves as a community freezer. Residents store food throughout the year in a number of different tunnels 30 feet below the ground where the temperature is a constant -15 degrees Celsius. You could also stop by the local school to be welcomed by friendly staff, visit the Hamlet office for a chat and cup of coffee, or see what community events are taking place at Kitty Hall.

While exploring Tuk you may be lucky enough to see some Arctic wildlife. The community lies close to caribou and polar bear migration routes, although foxes, rabbits, and ravens are more often sighted. Stay a little longer into spring and see ducks and geese or wait until summer to see majestic beluga whales and taste some fresh arctic fish.

Destination Tuk is well worth the journey. However, with the new all-season road this frozen river travel may only be a memory in years to come. To all teams who haven't quite made it to Tuk, yet you can do it!

This post was originally written and published in 2016; it has been siglightly updated.